A few weeks ago, my husband and I began suspecting there were health issues affecting deer in an area we hunt.  All summer long we saw a healthy herd traveling throughout the area.  Bachelor groups of bucks, does and fawns were found posing for our cameras on a regular basis. Then, seemingly overnight, we experienced a severe drop off in the amount of pictures on our cameras.  Walking the area, we found one doe floating in a pond, another doe dead in the woods.  EHD or Epizootic Hemorrhagic Disease was suspected.  Since then, three more dead deer consisting of a fawn, a 5 pointer and a 7 pointer have been found.  We’ve captured one deer on camera in a state of severe emaciation.  Severe emaciation may be observed in animals recovering and I am hoping this is the case.  Additional signs of EHD are lethargy and the deer often salivate excessively.  Hemorrhaging from the mouth and tongue is also a common symptom.

During this time, we contacted the DNR representative for the area. He confirmed reports of suspected EHD occuring not far from where we seeing the dead deer.

According to the Maryland DNR website, EHD (Epizootic Hemorrhagic Disease) cases typically occur between mid-August and October and is caused by a virus that is transmitted through the bite of tiny flying midges. The onset of freezing weather typically brings an end to a given outbreak as it kills the midges.

It is my understanding that this virus does not transmit to humans but to be honest I would really hesitate to eat any meat from animals suspected or having or recovering from EHD.

Popular consensus is that EHD typically occurs during droughts. So why this year? There is no drought that I know of on the Eastern Shore of MD.  My thinking is that there was so much rain, puddles formed in the fields.  Those puddles then heated up making ideal breeding conditions for the midge flies. The deer, living in the corn and bean fields, discovered an easy water source in those puddles. When the deer went to drink, the midges bit and transmitted the virus.

Link to the Maryland DNR news release regarding the tracking of recent deer deaths:

Possible EHD? Notice the back hooves. Could this be some type of injury or EHD affecting the hooves as it sometimes does? Photo credit JoAnn Herbert 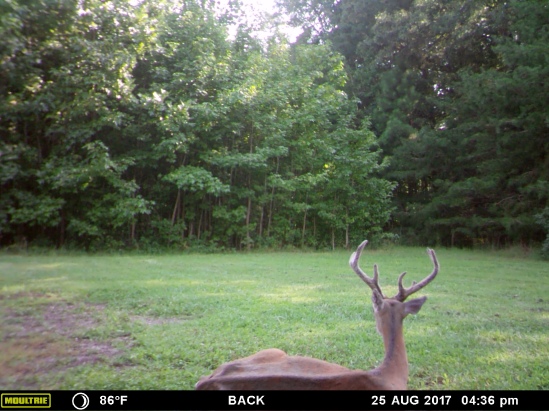 Same deer exhibiting signs of lethargy. I can’t say I have ever seen a deer lay down in the middle of the day out in the open.  Photo credit: JoAnn Herbert

Hope your season is good!

My writing won't be be perfect but it's from the heart. Hopefully we can all get a good chuckle. With the economy as it is, if I can provide some honest feedback on the hunting products we use I hope I can help someone to spend their money wisely. Thank you so much for your interest in my blog-it means alot.